Two teams of 10 Product Design pupils in Year 10 have been working since September to enter the F1 in Schools competition.  On Wednesday this 24th they competed in the Regional Finals and were very successful.
The 'Auto Arrow' team were given two award; the 'Team Identity' award and an award for Innovative Thinking'
The 'Blink of an Eye' tem were given the 'Judges  Discressionary Award' and have gained a place at the National Finals to be held at Silverstone on 20th - 21st April this year.
If successful there then they will be off to Texas for the World Finals in August!
More on this fantastic achievement to follow shortly 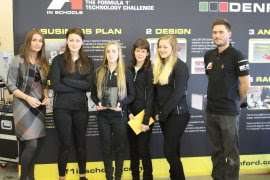