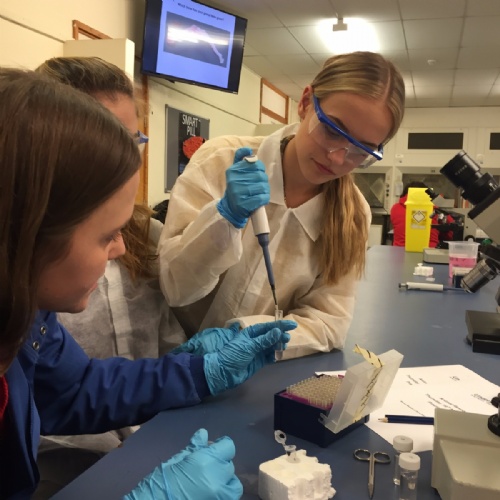 Year 10 pupils learn about the uses and stigma of animal testing.

On Thursday the 19th of November we visited Manchester University on a trip to find out about the uses of animal testing and discuss the stigma around it. We participated in several activities along with other schools including experiments and an ethics debate. 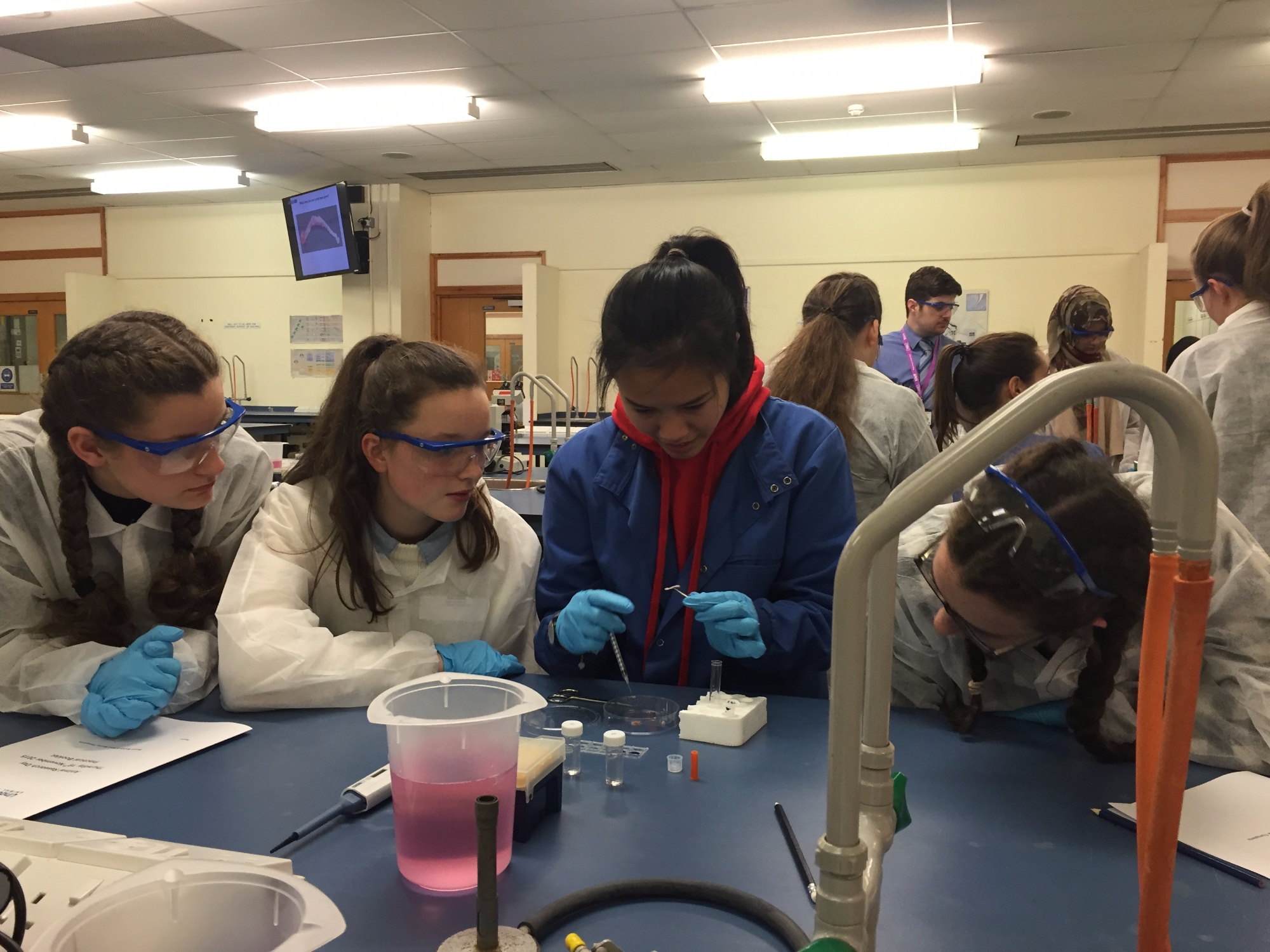 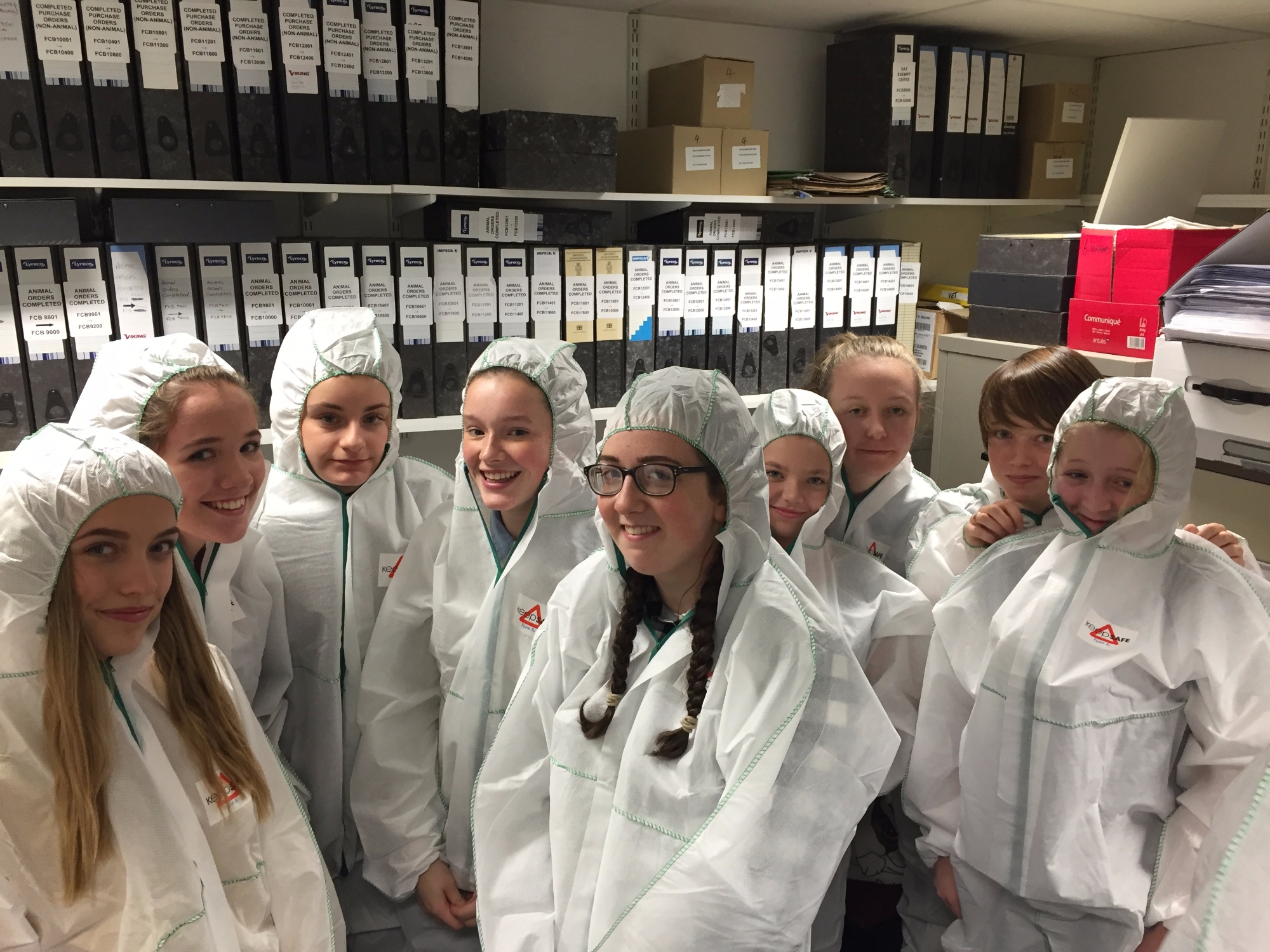 In the morning, during the ethical debate we discussed the history of animal testing and how it developed. We found that its use was vital in the discovery of basic medical facts such as the structure of the heart, which was discovered in the dissection of a dog. This showed that the use of animal testing was necessary in the past and is now, as new illnesses need treatments. In different groups we decided which animals we thought were more commonly used in testing and why. There are several categories of protection for animals, the lowest being for flies and rats, more for domestic animals such as dogs and cats, and the highest being for animals closer to human intelligence such as monkeys and octopi (which actually used to be commonly used for research before they were discovered to be very intelligent). During this session we learnt a lot about the background of animal research. 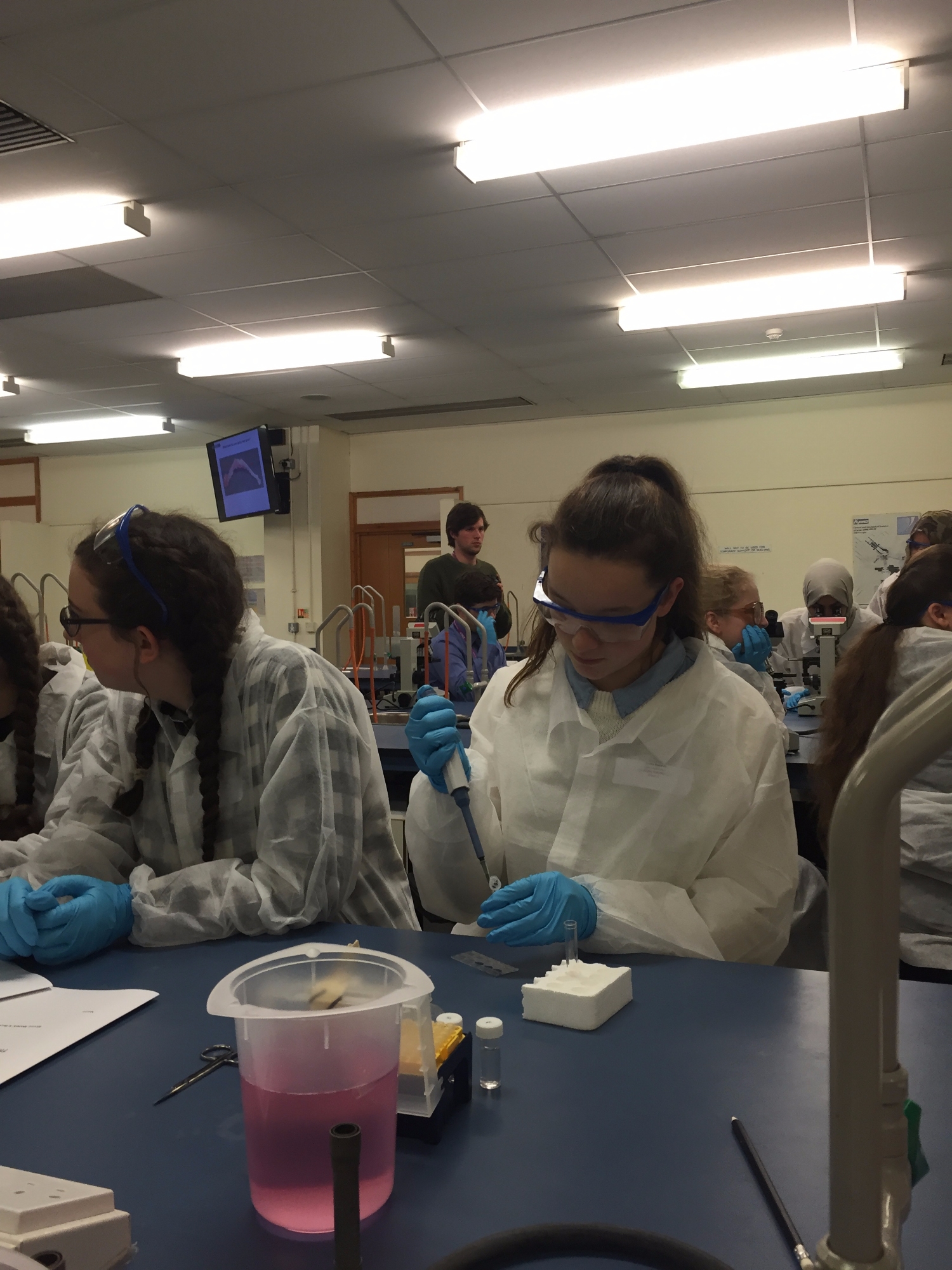 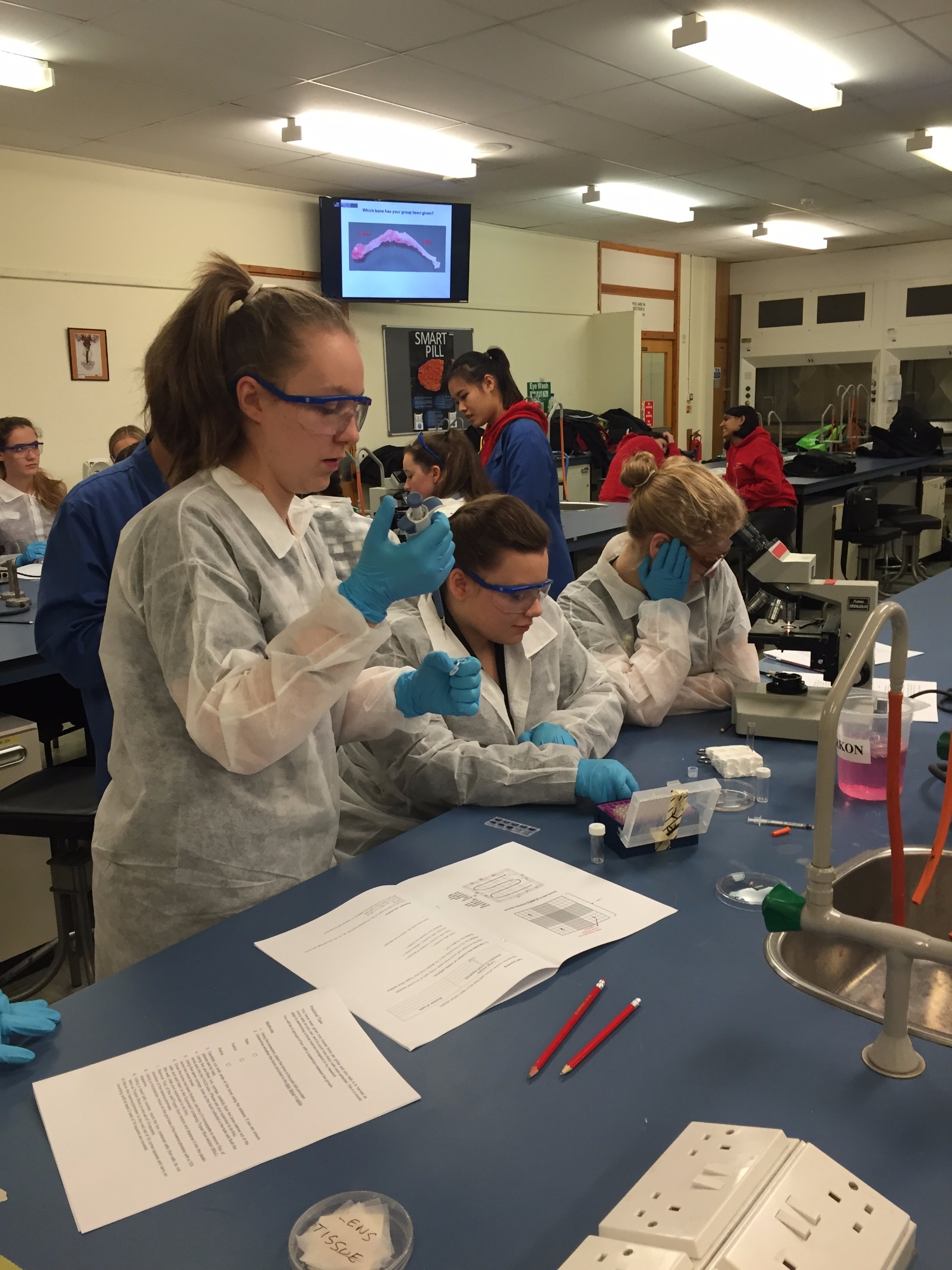 Later in the day we did two practicals, the first to do with developmental biology, the research into growing animals. We observed chick embryos to see the affect of temperature on their heartbeat. As we measured the heart rate we could see that the chick was not very developed with only a heart, blood vessels and a spine. This helped show us how a living model can improve the understanding of embryo formation.  The second experiment was extracting bone marrow from mouse bones and testing to find live cells. The bones were cleaned in saline solution and we cut the ends and used a needle to extract the bone marrow. We put the bone marrow into a small container and added blue dye. Using a syringe we then put the liquid into a slide to look at under the microscope. Any dead cells would have turned blue as the membrane would not prevent the blue dye entering. Any living cells would stay white. By doing this we could see the amount of cells in a small sample which we could multiply to find out how many cells we could extract from a larger sample. From this, we learnt that there are lots of invasive procedures that need to be tested on animals before they are used on humans, where it could be more dangerous. 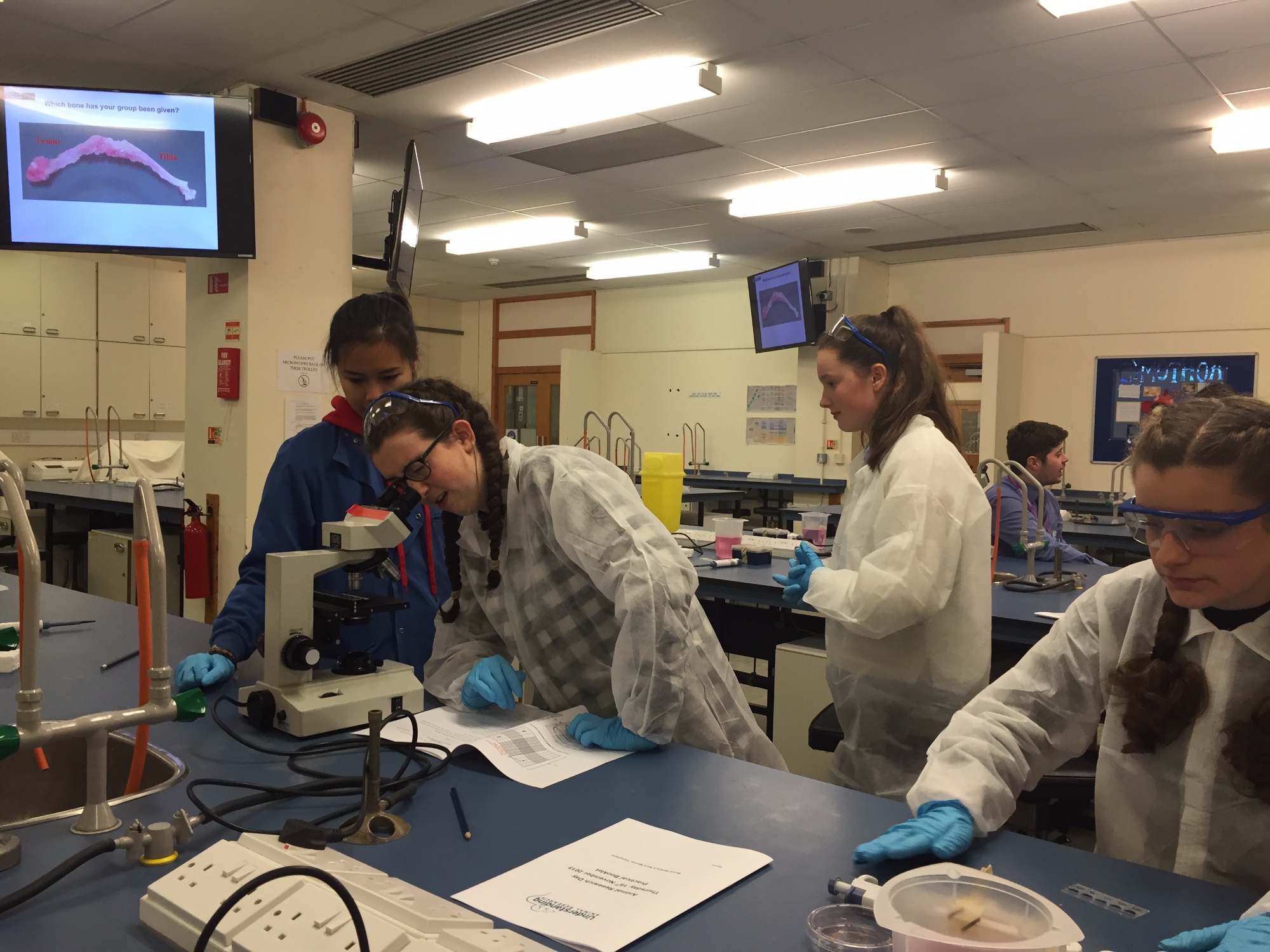 Our final session was a tour of the research facility where all the animals were kept. We saw a range of animals used for different studies. The animals were predominantly mice and rats, which have structures similar to humans on a smaller scale. They are used for experiments from monitoring brain patterns and animal behaviour study to dementia and heart disease research. We found that research benefitted veterinary medicine as well as human treatments. In other rooms there were fish tanks, where zebra fish were being used in gene experiments and tumour research. Larger animals are also used; sheep were kept to test pacemakers for further heart related research. Here we learnt that different animals are important for different reasons. All the animals had pleasant, clean living conditions with sufficient food and water supplies. All the animals were kept in company as they dislike isolation. The system for cleaning the plastic boxes was really efficient so they were cleaned regularly. There was a machine that could stack them in larger numbers and dispose of the waste, then add new bedding for the animals and send them on a conveyer belt to be stored, ready for use.

Overall, we found that our views had been changed after our visit, as, after seeing the facilities ourselves, they were a lot better than we expected and animals were only used as a last resort. In many cases, cells are grown in a Petri dish and used instead of real animal models. We felt that without animal research, we would have a lot fewer cures for simple illnesses than we do now.