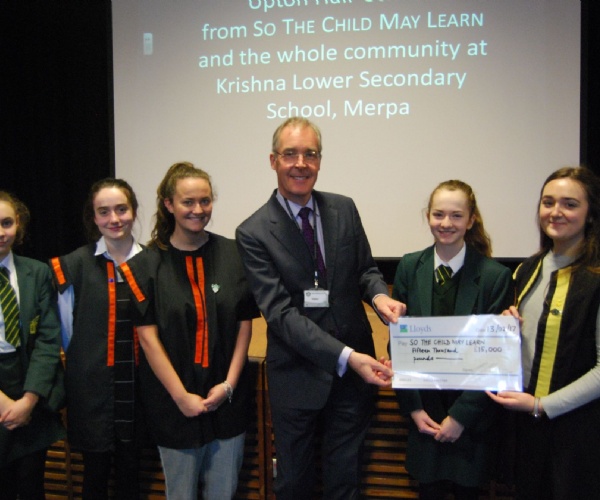 Read about Mr Quinn's voyage of discover to Nepal.

On Saturday 25 April 2015 an earthquake stuck Nepal. Its epicentre was in the Ghorka district, west of the capital, Kathmandu. The quake measured 7.8 on the Richter scale and was classified as severe.  Almost 9,000 people were killed and over 22,000 injured.  On the far side of Nepal on Mount Everest, the earthquake triggered an avalanche killing 21 people, the largest loss of life ever recorded in a single day on the mountain.  Hundreds of thousands of Nepalese were made homeless and whole villages were flattened across many districts of the country.

Around the world, governments, religious groups and charities mobilised aid efforts to try to get Nepal back on its feet.  On the Wirral, John Clark, a former Headmaster of Birkenhead School, had launched a charity in 2014 to develop education projects in Nepal. So The Child May Learn was already working in schools in the Bhimkhori district, four hours east of Kathmandu.  Following the earthquake, their work was shattered, houses and schools razed to the ground or made dangerous beyond repair.  John appealed for help and at Upton Hall we pledged to raise £15,000 to rebuild Krishna School in the remote village of Merpa.  In the spring of 2017, we reached our target, handed the cheque over to the charity and the work on the school began later that year. 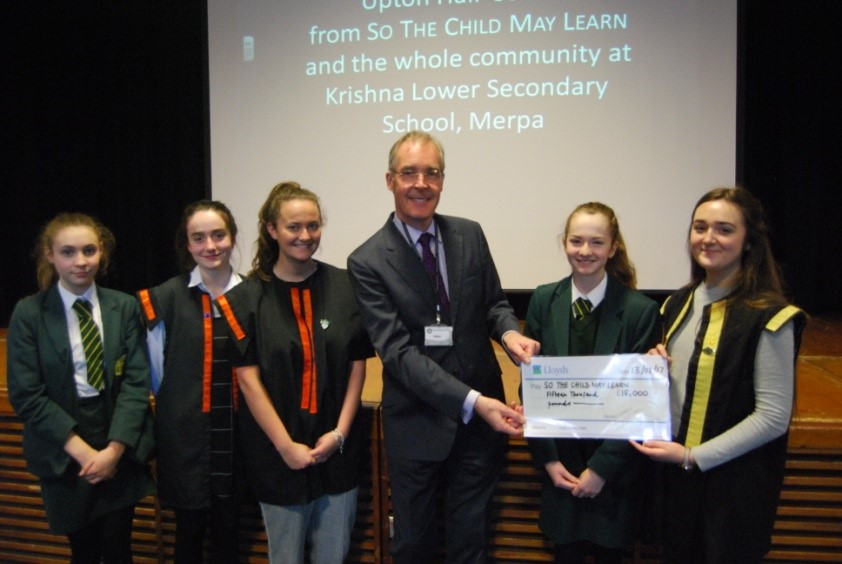 John Clark receives the cheque from Alice  (Head Girl in 2017)

This explains why, on Sunday 28 April 2019, I found myself flying along the Kathmandu valley with a view of Everest and the Himalayas to the left and blue skies overhead. I had been asked to represent Upton at the official opening of the new school which was due to take place on Mayday.

Nothing had prepared me for the experience of life in Kathmandu.  All of the senses are immediately assailed – the noise, colour, sights, smells, heat – all overwhelming. The city is crowded, colourful, dynamic, chaotic, full of energy and life. 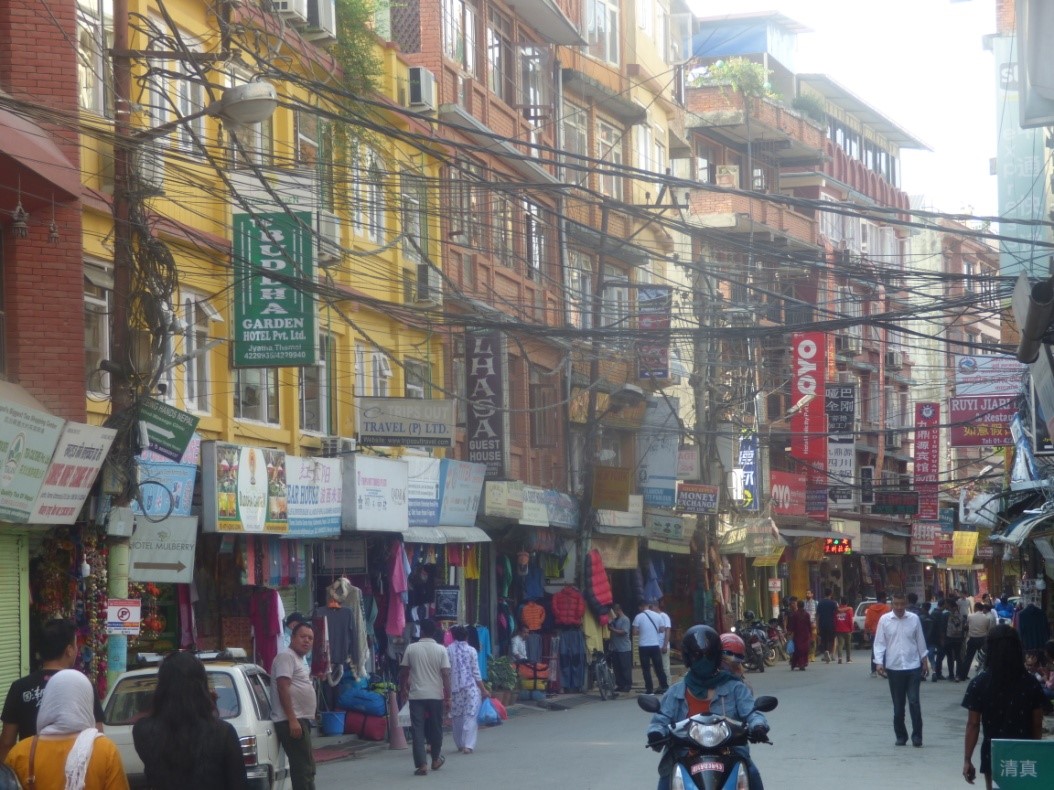 The Thamel district in Kathmandu

After a day in the city and a chance to acclimatise we embarked on a four hour drive by jeep into the mountains to the east of the capital.  Our destination was Bhimkhori district and the village home of Binay Lama, co-founder with John Clark of So The Child May Learn. 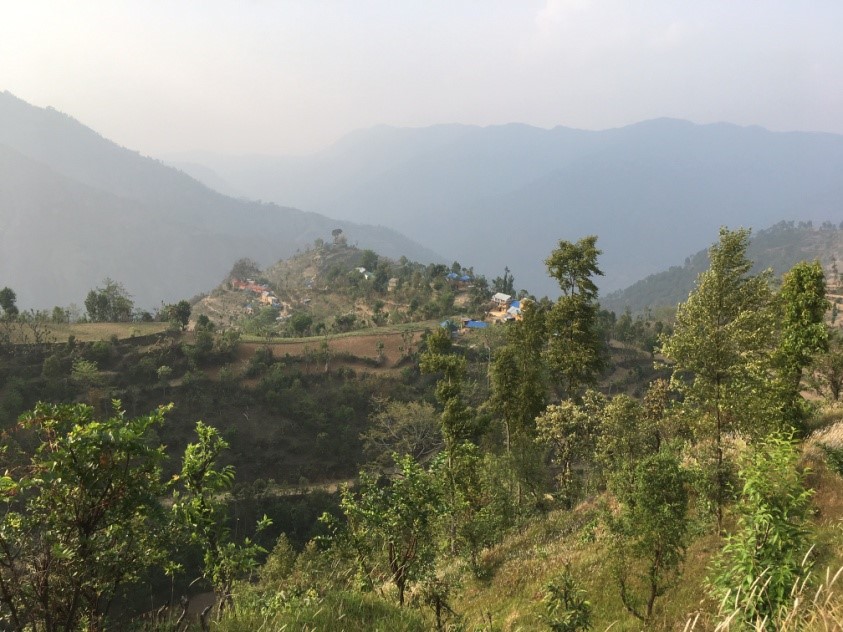 The road through the mountains

Binay and his family gave us a great welcome and we were soon sitting down in the garden with bowls of dal bhat – the national vegetarian dish of Nepal consisting of steamed rice, lentil soup and spicy pickles. 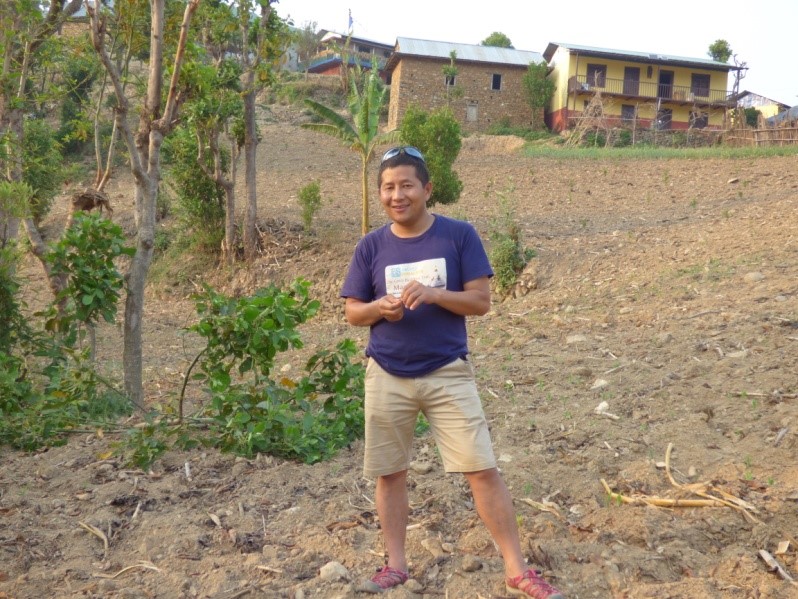 The morning of Wednesday 1 May dawned bright and clear and by 8.00am the heat of the day had started to build.  The village of Merpa was a two hour trek through the mountains along steep and stony tracks. 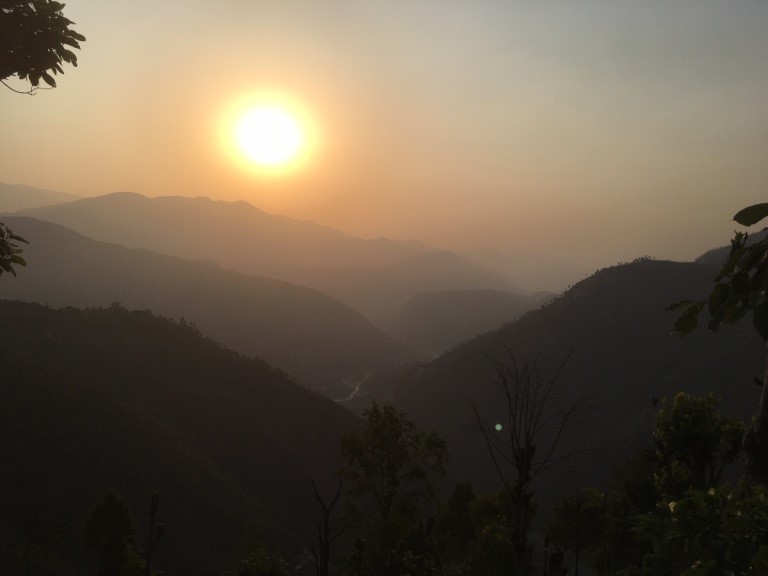 It was a difficult journey and I gained a new respect for the children, many of whom have to walk even further every day in order to get to school.  When we arrived shortly after 11.00am, the children were already starting to gather around the central courtyard area of Krishna School. The school has been rebuilt in three earthquake-proof blocks.  At the moment the classrooms are functional and basic.  The children however are wonderful as is the stunning location of the school. 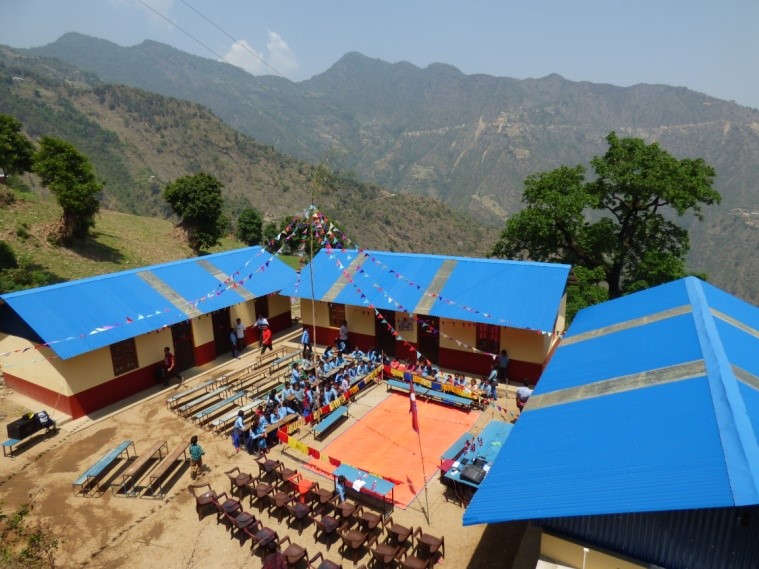 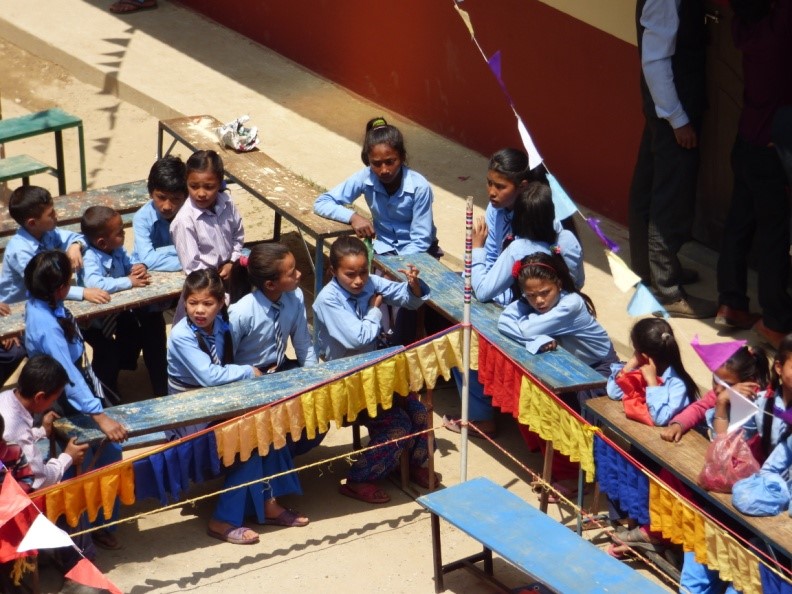 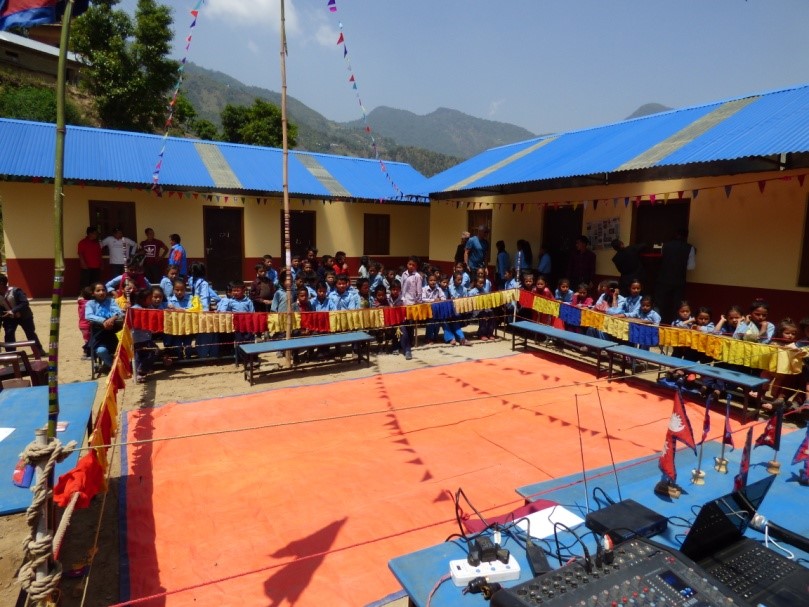 The opening ceremony got underway with the first of many lengthy speeches. At least a dozen speakers gave us the benefit of their wisdom, some were staff at the school, others were local dignitaries.  At one point a journalist got up and spoke for ten minutes.  At the end of his speech, I turned to Binay and asked him what he had said, “Nothing”, came the reply.  Throughout the four hours of the ceremony, the children sat patiently and even managed to look interested from time to time.  They were positively enthusiastic when the dancers took to the stage.  They were fabulous. 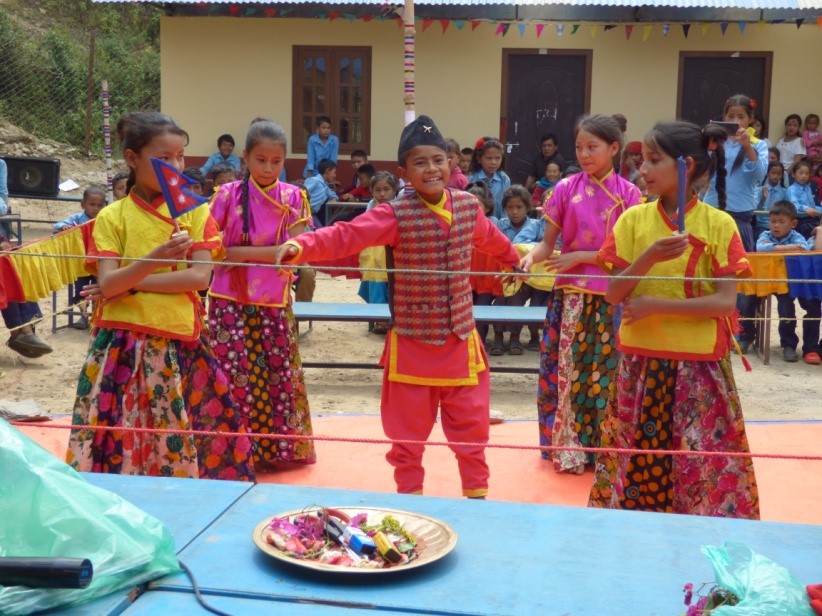 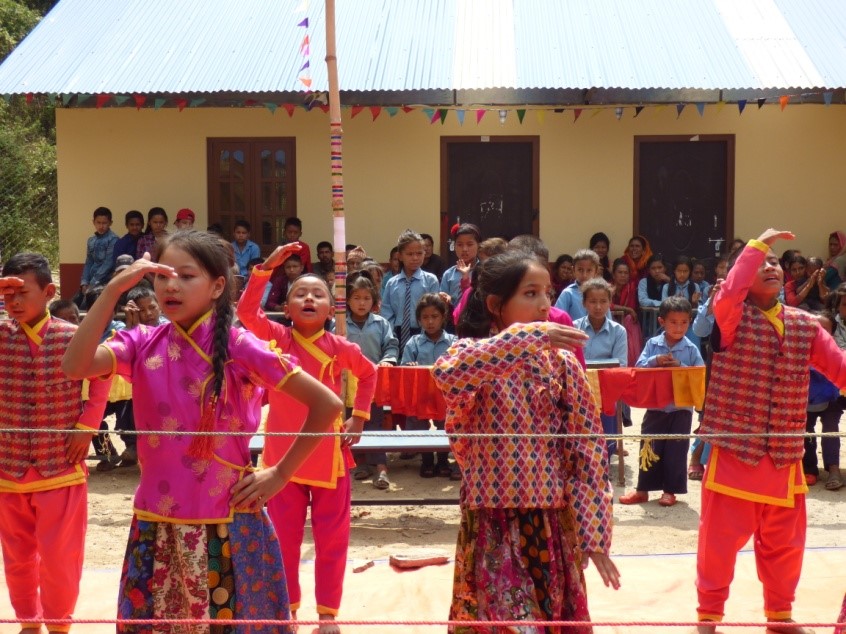 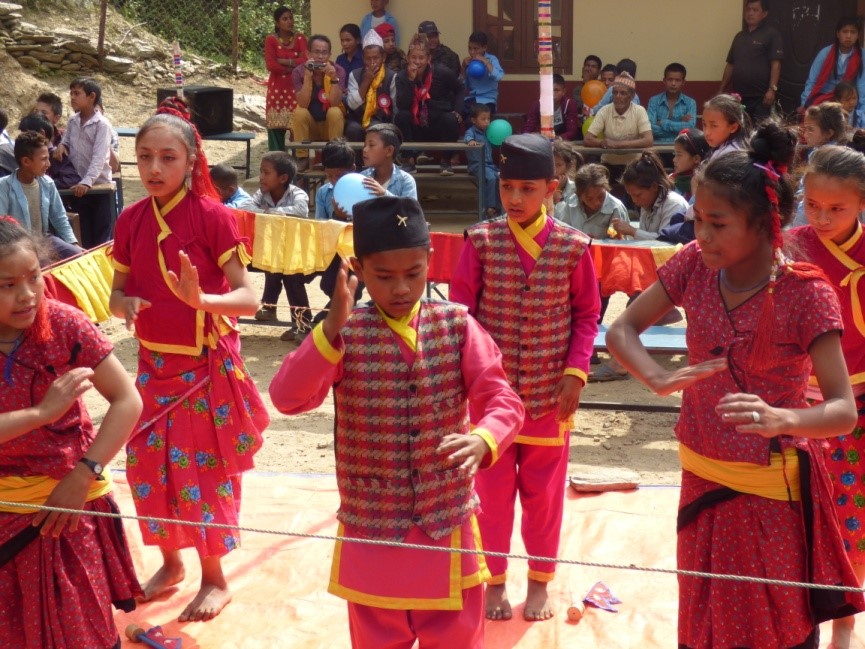 Finally, the plaque was unveiled, ribbons across the classroom doors were cut, sweets and chocolate were given out to the children and at 4.00pm the ceremony was over. 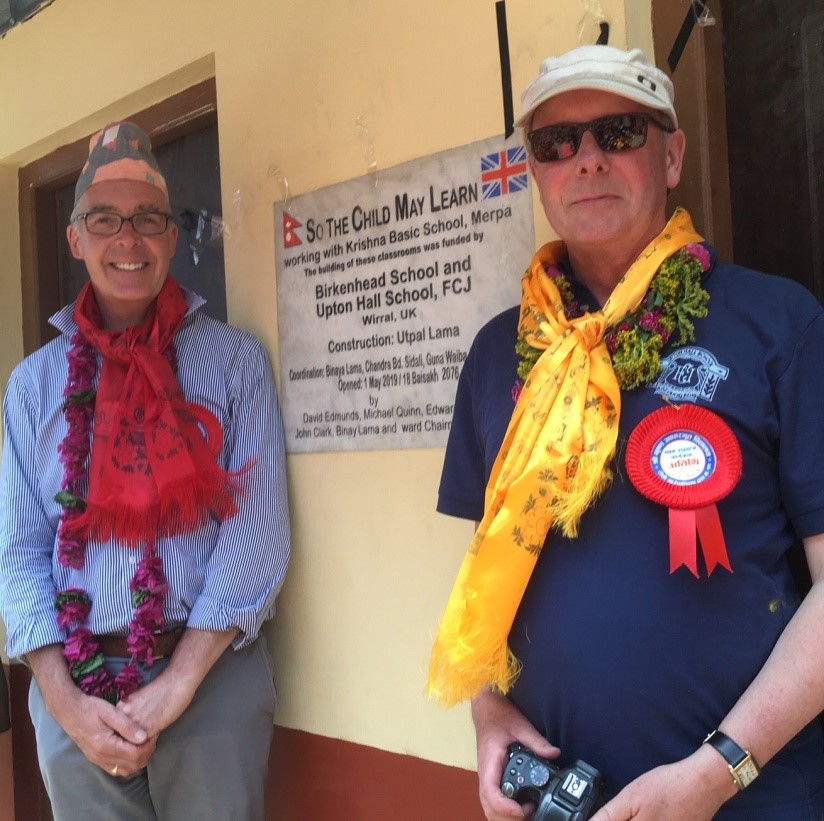 On Thursday we made the return journey to Kathmandu and spent the weekend absorbing more of the sights and sounds of the city. One particularly memorable experience was a visit to the Pashupatinath Temple.  This sacred Hindu temple complex is located on the banks of the Bagmati river.  It serves as the seat of Nepal’s national deity, Lord Pashupatinath and it is the place where the bodies of Hindus are cremated. The ceremony is very public and once over, the ashes are pushed into the river. 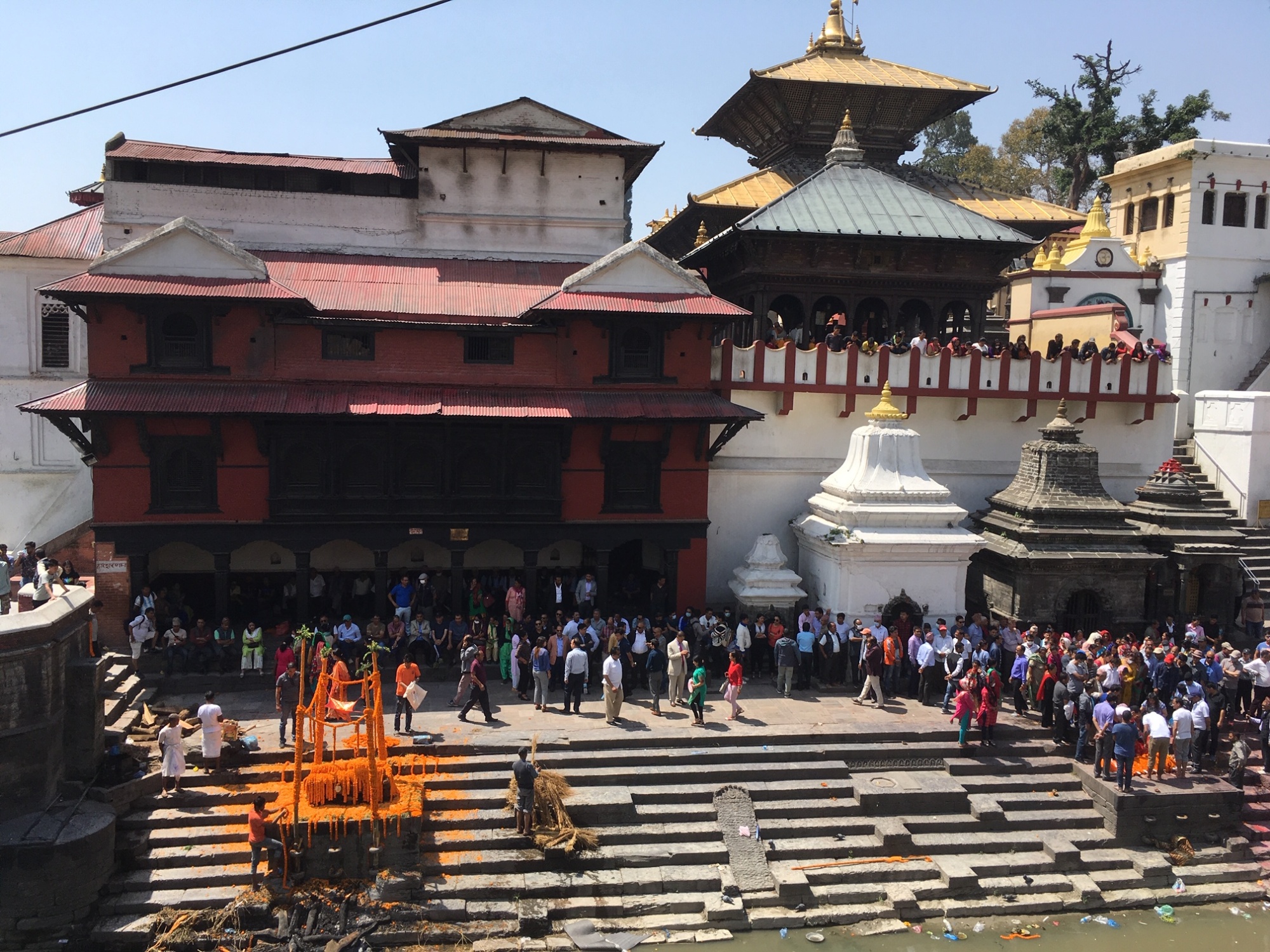 The experience at the temple was just one of many abiding memories of this amazing country of startling contrasts:  the city and the countryside, the wealth and the poverty, the noise and the peace.  As so often is found, in different places around the world, Nepal’s greatest asset is its people – kind, polite, welcoming, generous, curious, resilient, creative and, although over 4,500 miles away, our neighbours.  The people that we met were so grateful for the work Upton Hall has done to support education in Nepal. This project has shown our FCJ values in action.  True companionship, giving hope with dignity to the young people at Krishna School.  There remains more work to be done.  The partnership between Upton Hall, So The Child May Learn and Krishna School will continue.  We have been invited to return to Nepal with a group of Upton students to really cement the link and to carry on the work.  What a wonderfully exciting prospect!