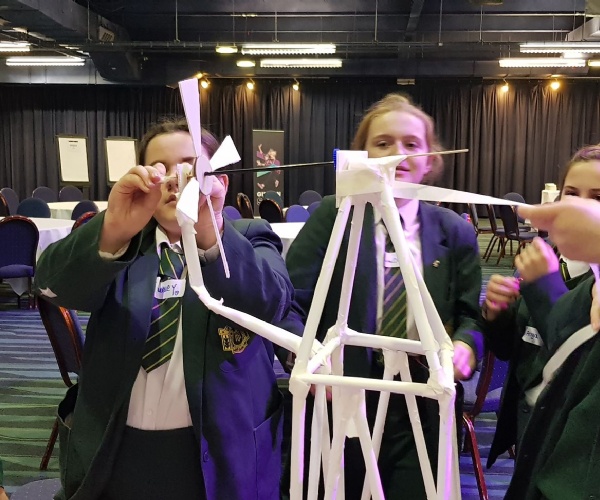 On Thursday 15 March, over thirty Year 8 pupils attended the Girls in STEM event hosted by Accenture UK in Bolton. Read on to hear more of their exciting day......

On Thursday 15 March, over thirty Year 8 pupils attended the Girls in STEM event hosted by Accenture UK in Bolton. This was a joint visit with Birkenhead High School Academy and was the first of many collaborative projects between the all-girls schools of Wirral, through the Wirral STEM Partnership for Girls, coordinated by Upton Hall.

The pupils met with hundreds of other girls from across the North West in what was a very empowering day.

The day began with keynote speeches from some very successful women in STEM, highlighting the need for more women to enter STEM careers. We then moved on to a hands-on workshop where pupils worked in teams to create the most efficient wind turbine possible. The teams from Upton worked very well together and all managed to produce a working prototype. Amelia Boylan won the overall innovation prize for her innovative testing procedure of her team’s prototype.

Next there was a marketplace where pupils were able to engage with a wide range of STEM employers such as Lloyds Banking Group. There was a treasure hunt as part of this task where pupils had to find information from each stall. Eve Ryan managed to scoop the prize for the treasure hunt out of all of the attendees.

In the afternoon pupils worked in different teams to develop a concept for a smart phone app, aimed at reducing food waste. There were many innovative ideas!

The final part of the day saw pupils engaging in a Q&A session with a number of successful women in STEM. Our pupils came up with a range of thoughtful questions.