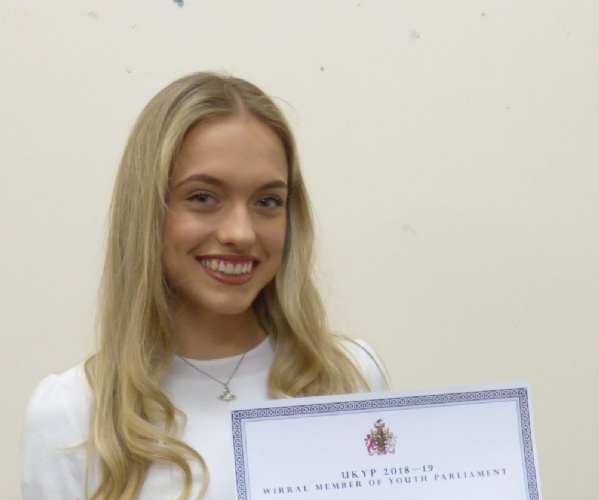 We are delighted to announce that Year 12 student, Ellie-Jai has secured her place as a Member of the UK Youth Parliament.

Ellie-Jai, applied to become an MYP (Member of Youth Parliament) with the support of her History teacher, Mrs Davies, by emailing her manifesto to Wirral Council.  Once she was a shortlisted candidate, Ellie-Jai was part of the MYP election process and raised support in school as part of the voting process.  Ellie-Jai gained support from our pupil and student body by speaking in assemblies in order to get her message heard.

Ellie was motivated to become a MYP because she has a strong interest in representing her peers and in topical political issues.  Becoming a MYP will enable Ellie-Jai to represent young people in the UK with a voice that will be heard by local, regional and national government. After a successful election, Ellie-Jai's responsibilities now include attending regional conventions and residentials, liaising with local MPs, meeting young people and listening to their issues, as well as a debate in the House of Commons!

Ellie-Jai commented that it is 'a fantastic opportunity to not only broaden my political knowledge as a whole but also my knowledge of local socio-economic problems - as well as giving the young people of Wirral a political voice.'

We wish her every success in her role.  Further details of the UK Youth Parliament can be found here.